Shop: Printable Games for Every Party 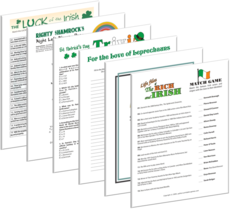 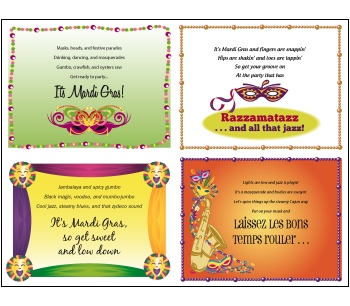 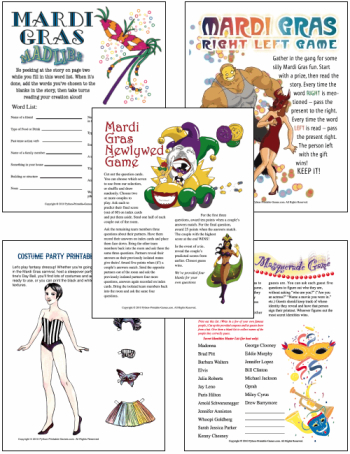 Ahoy, Matey! It's time for a pirate party!

Pirates and buccaneers are one of the most popular party themes for adults and kids.

Whether you're planning a buccaneer birthday bash for kids, an adult theme pirate plunder party or a costume gathering for Mardi Gras or Halloween, a pirate party theme will be a sure hit.

Who doesn't like to dress up in swaggering pirate clothes (or sexy pirate costumes for adult pirate ladies) and talk like a pirate for a few hours?

With the right costumes, theme decorations and pirate games your swashbuckling party will be a smash hit for any age pirate lover.

For entertainment at your pirate bash, party games make the perfect activity or ice breaker. Inexpensive printable party games are your map to pirate party success. No matter what age your celebrating pirates are, there's a hilarious and fun swashbuckling buccaneer party game to play. 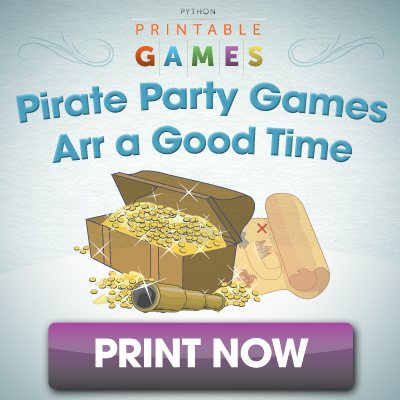 I recently ordered the Pirate Party Games Collection by Print Games Now (formerly Python) to review for this site, and I'm impressed by both the quality and the price. When you place an instant order for a pirate party game collection from you get immediate access, and can copy to print as many times as you like. I saved the game sheets - they're in Adobe PDF format - on my computer's hard drive.

After a quick and easy online purchase process, you simply download the pirate party games to your computer and then you can print game sheets whenever you like. And, you can print unlimited copies of your games, so you can print as many pirate games as you need now, or later.

Many of my readers look for pirate printables and crafts, and the games are a popular item on all my pages. When the publisher offered me a free game collection of my choice to evaluate I jumped at the opportunity to get the pirate games collection.

I really like these printable pirate party games, and the ordering/download process was fast and simple. There's absolutely no special software to install - all you need is Adobe Acrobat reader to open and print your games. Most computers have this free program already installed, and if not, you can get a quick download directly from Adobe software. My family will definitely be playing a few of these pirate games at our next birthday party. My grandkids love anything with a pirate theme!

Now, how about those fun pirate games I ordered?

Here are highlights of the Pirate collection by Print Games Now.

Pirate Games for Kids of all Ages

In full disclosure, I need to tell you that I'm a Print Games Now affiliate, and I offer their printable games for sale on my web sites and blogs, including this site.

But I also want you to know that I've personally ordered and downloaded the Pirate Party Games Collection, and I can tell you from firsthand experience that they truly are unique and a good value - they're a treasure chest of pirate party fun that take only minutes to order and print.

You can choose from a cute Pin the Parrot on the Pirate game for younger children, a matchup game, printable pirate treasure maps, a collection of Haaarrrrible Pirate Jokes (with answer key) that your elementary to tween kids will love, hilarious Pirate Trivia questions to delight teens and even adults, a pirate theme backyard nature scavenger hunt.. For the adult pirate party-goer, you can use any of the kids games to get people relaxed and laughing, or choose from several pirate party games with more grown up themes including a Pirate MadLibs and Pirate Word Scramble.

There's also a Newlywed-style game with a purely pirates theme designed for couples or partners.

The Pirate Games collection includes a collection of treasure maps to use for games or to design your party invites, decorations and favors.

You can buy any of these hip pirate games separately, but the package deal, including pirate games for children and grown ups, is a terrific value. Click to view and buy Pirate Party Games Collection at Print Games Now.